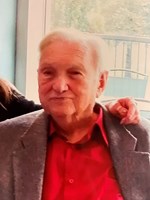 Sad to announce the passing of Reuben in his 90th year on Sunday, January 22nd, 2023. Reuben and his family moved from Pembroke, to Sudbury in the spring of 1966. Reuben went to work at Inco Mines until his retirement in 1993. During that time, he lived with his family in Lively. After retiring, he moved to the French River area. In August 2022, he decided it was time to move from there. He chose to move to Midland, to be close to his sister, Doreen and brother-in-law, Ken. He took up residence at the Villa Retirement Lodge on Yonge St. until his passing.

He was predeceased by his parents Alvina and Carl Reckzin, his first wife Faye Howard and his third wife Barbara McCauley, his son Allan Reckzin (2021), and his son Steven Reckzin (2022). Leaving behind to mourn: his daughter, Shyanne of Val Caron, his daughter, Jody Lynn Matson and her husband, Ron, daughter-in-law, Ivy Reckzin of Guelph.

Special thanks to the Villa Retirement Lodge staff, he loved all of you, as well to Dr, Helt for his care. If desired, donations made to the OSPCA or the Guesthouse would be appreciated by the family.