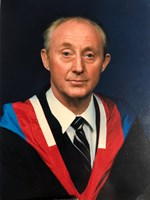 It is with sad hearts the Percival family shares the news of the passing of “Ted” Edward Percival in his 93 year on November 2, 2021. Ted is survived by his wife Diane (Bolen) Percival, his sons Peter and Paul, and his daughter Nicole. He was succeeded by his first wife Mary (Gilmore) Percival who past September 20, 1977. Ted was born in Warrington England where he was involved in the Sea Cadets, rowing club, boxing and cross country running. He studied Marine Engineering which lead to a career in the Merchant Navy. Ted emigrated to Canada with his first wife Mary in 1956 where he started his family and his sons Peter and Paul who were born in Gault Ontario, Teds career in hospitals began at St Mary’s Hospital in Kitchener, then St. Joseph Hospital in Brantford, in 1984 he took a position at Huronia District Hospital where he retired from. Ted was always involved in his community being active in the church St. Pius in Brantford, Sacred Heart in Port McNicoll and St Margret’s in Midland. He was devoted to his Catholic faith. Ted’s community involvement was not limited to the church, he was an active member of the Brantford Sea Cadets where he was the Commanding Officer for many years, a tradition his daughter Nicole followed in by joining the Midland Sea Cadets. Teds commitment to community continued in Midland where he was an active member of the Knights of Columbus. He was also a volunteer in the Special Olympics. Ted was a family man, always putting the needs of his family first, never putting his own consideration ahead of others. Sadly he suffered with Parkinson’s Disease for many years, however he did not let this limit him, and he became a mall walker and latter a Walmart walker, he was able to walk most of his life without the aid of a walker it was only in the latter years he required the use of one. Although life with Parkinson’s was hard, partly robing him of his mobility and voice in latter years he never complained and made the most of life, an example to all. The world lost a special man on November 2, he will be greatly missed by those who knew him.

Friends will be received at Carson Funeral Homes – JH Lynn Chapel, 290 First Street, Midland (705) 526-6551 on Thursday November 11, 2021 from 7pm-9pm with Parish prayers at 6:30pm and on Friday November 12, 2021 from 1pm-2pm *Mask are required. A Christian mass will follow at St. Margaret’s Catholic Church at 2:30pm *Please call and reserve a spot as they are limited and masks are required 705-526-6551. Memorial donations to the charity of choice would be appreciated by the family if desired.