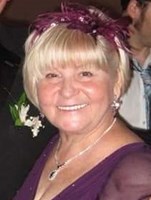 McCartan-King, Janet Eleanor (nee Michaud) born in Parry Sound, Ontario on May 12, 1937. In her 84th year with family present at Georgian Bay General Hospital, Janet took flight with Angels on December 30, 2020, soon to reunite with those loved ones departed before her. She is predeceased by her two husbands John C. McCartan and William P. King and her eldest daughter Patricia Lynn Dubreuil (nee McCartan). She was a loving daughter, sister, mother of seven, grandmother and great-grandmother. Left to remember her passion for life are her children John Anthony, Elizabeth Louise McCartan, Edward Perry, William James (Annie), Gerald Charles (Lory), Michael Patrick (Nancy). Her former son-in-law John Dubreuil and daughters-in-law, Margaret, Lorraine and Lisa were also her friends. Her spirit is deeply imbedded in her 22 Grandchildren and 15 GreatGrandchildren. She was the eldest child of the late Margaret and Gordon Michaud and sisters to Carole Anne Isnor, Elizabeth Louise Michaud and Linda Saville. Janet maintained a great love for life, her family, music, dancing, parties, feasts, and lived by her old fashioned values. She spoke what she thought and lived as she wanted, she knew every day was a gift to behold. A graduate of St. Joseph’s College School in 1955, Janet lived in the East End of Toronto for many years, wherein her motherhood years began. She successfully obtained her degree in Human Resources Management from Ryerson in 1985 and later retired from Ryerson Polytechnical Institute. A genuine friend, she lived a purposeful life anchored by faith, leaving behind a legacy of strength, devotion and perseverance to all who knew her. In lieu of flowers, donations to a favorite charity in Janet’s memory are welcomed. Due to Covid Restrictions, a Private Service to be held at Carson Funeral Home, 290 First Street Midland, Ontario and Interment at Mount Hope Cemetery, 305 Erskine Avenue, Toronto, ON