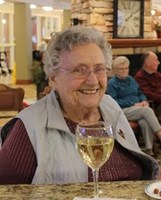 Nancy’s Mount Forest community was very important to her . She leaves behind Elwood's children Diane Donald (Predeceased) and husband Ernie McDougall, Jim Donald and his wife Lois, Marie and her husband Barry Leibold, Kate and her husband Jean Pierre (Vancouver) and Ken (Predeceased) and his wife Deborah (Newmarket). Fondly remembered by the all the Donald grandchildren and great grandchildren.

In the fall of 1967 Nancy and Arthur relocated to Orillia from Toronto where they bought a small grocery store with a trailer park attached in Orillia‘s North Ward. Finding that they love being self-employed and with the help of family and friends (financially) they bought 100 acre farm on the six concession of Orillia Township. Here they had the foresight to envision a multi manufactured home property operated by two sewage lagoons and one artisan well. Their endeavour was a huge success when they sold the park with 106 homes. Today 236 homes makeup the community of Silver Creek. From humble beginnings in Toronto, with Nancy as the visionary and brains and Arthur, as the braun along with the help from Gord Leitch and Roy Reed, they created the park that exists today. When Arthur’s health began to fail they regretfully sold the property long before their vision was complete. After Arthur’s death in 1989 from Alzheimer’s disease, Nancy moved to Mount Forest where she married Elwood Donald ,who lived on the Ross farm.

In retirement Nancy became very active in the community and Woodland United UCWI, book clubs and quilting clubs .Nancy and Elwood enjoyed wintering in Florida at Town and Country Park in Dade city, playing golf every day, having dinners out and playing cards. Following Elwood's death Nancy moved back to Orillia and lived at Leacock retirement lodge where she reconnecting with old Orillia friends .Her last days were spent in enjoyment at Champlain Retirement Residence.

She was an accomplished sewer knitter and quilter. Nancy loved to read, enjoyed a competitive game of bridge and good conversation. Nancy like nothing better than to be taken by her daughter, Debbie for an afternoon in Toronto to enjoy numerous plays, musicals and theatre productions . Her happiest times were spent at the Gilbert household around the pool. While there, enjoying good friends and relatives.

She always had a glass of wine in hand while watching her grandchildren, great-grandchildren and loving friend’s kids play in the pool .

The family would like to thank the care and compassion given to Nancy by her primary caregiver Dr. Kareem Dharsi and the loving staff at both Leacock and Champlain Retirement Residence .

Cremation has taken place and Nancy will be laid to rest with her husband Arthur, daughter, Heather, son Ron and granddaughter Tia, at Lake St George Cemetery in Washago. A celebration of Nancy‘s life will take place in the spring in Mount Forest at Woodland United Church in lieu of flowers please consider donations to the Canadian Alzheimer Society or Soldiers Memorial Hospital. Arrangements entrusted to Carson Funeral Home Orillia