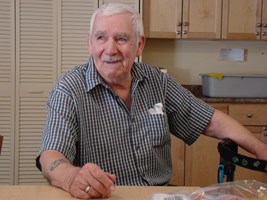 Passed away peacefully at the age of 92 on July 07, 2020 at Hillcrest in Midland Ontario.

He was born at Frying Pan Bay, on Beausoleil Island in 1928. His grandmother Susan Otter, delivered him into the world as last of the Corbier family to be born on Beausoleil.  He was schooled in Honey Harbour, he worked at Beausoleil Island for 20 years, he worked at Picnic Island for 20 years. He fished the waters here and hunted and trapped, all to feed his family of seven. In later years, he moved to the Huntsville area, then he moved back to Midland where he spent the last 15 years of his life to be near his family. He’ll always be remembered for his generosity, sense of humour, his love of good times and his respect for his indigenous elders and tradition.

Cremation has already taken place and a Celebration of life will be scheduled at a later date. Funeral Arrangements entrusted to Carson Funeral Homes – JH Lynn Chapel, 290 First Street, Midland (705) 526-6551. Memorial donations to Our Lady of Mercy Church, Honey Harbour, Ontario would be appreciated by the family if desired.