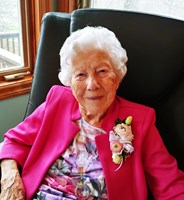 Velma passed away peacefully at Soldiers Memorial Hospital in Orillia on Saturday, March 14, 2020 in her 101st year surrounded by her family. Velma was born to Thomas and Mabel Coffin in Yeovil, South Petherton, South Somerset, England on May 2, 1919. In her 18th year she emigrated from England to Canada to reside with her uncle and aunt, Reginald and Evelyn Travers, in Toronto. After moving to Toronto she met her future husband, Davis Webb, and was married on November 3, 1951. Davis preceded her in death on September 4, 2004. They were married for 53 blissful years. Velma was ardently involved with the church, her community, and held many different jobs during her lifetime. Most notably, Velma worked in an ammunition factory to support the second world war effort. Velma is survived by her children and spouses Jane (Gene) Pong and Donnalyn (Peter) Dahlin; her grandchildren Gene (Brian), Khristina, and Chris (Heather), and was pre-deceased by her infant daughter Susan, and her sisters Lilian Pratley, Vera Betts, and Edna Nibbs, all of England. Velma was always known for her welcoming, insightful and caring disposition which allowed her to develop strong relationships during her long life. She will be lovingly remembered by her children, grandchildren, nieces, nephews and her numerous friends. Special thanks to John and Laura Par (May's Manor) and Dr. Michel Ives for the many years of wonderful and loving care they provided to Velma. A Celebration of Life will take place at a later date. In lieu of flowers, memorial donations made to CNIB (Canadian National Institute of the Blind) or a charity of your choice would be appreciated by the family. Arrangements entrusted to the Doolittle Chapel of Carson Funeral Homes, 54 Coldwater St. E., Orillia, (705) 326-3595.