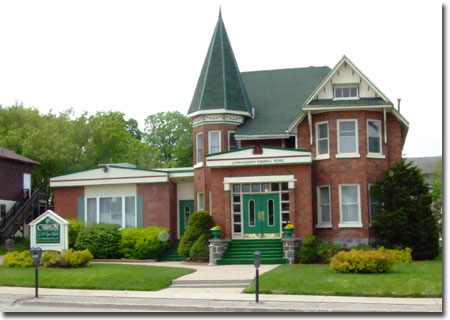 With over 80 years of serving Midland and the surrounding area, we have earned a reputation that is built on the services we provide – care, consideration, and respect. With such longevity, you may ask yourselves what makes a funeral home successful. Or more to the point:

Why should I choose Carson Funeral Home?

When comparing funeral homes, the first point that comes up is always the people.
The J.H. Lynn Chapel has always been, and remains today a family business. Since the days of James Lynn, Alexander Barrie, and J.R. Morrow the family traditions of trust and care have continued. We are very proud of the family and staff here, and you should know that here you will always be treated like family. ( Learn more about our staff )

The second aspect that comes to mind is the facilities.
Are they comfortable and welcoming? The minute you walk through the doors of the J.H. Lynn Chapel you will feel the family touch. We are constantly told how “the funeral home just doesn’t feel like a funeral home”. We would like you to be the judge. A spacious chapel, warm and tastefully decorated visitation rooms and washrooms, and precious wood and antiques all soften this large, accommodating facility.

The third and final consideration when people choose Carson Funeral Homes is value.
Since the days of James Lynn and Alexander Barrie there has been a tradition of not only care but of affordability. This tradition remains today with the Carson Family. We continue today to provide services to all who shall require them, regardless of ability to pay. We will work with you to remain within your budget while at the same time still providing a meaningful service for you and your loved ones.

During 2001 a major renovation throughout most of the build was completed which consisted of moving and enlarging the lounge. New washrooms were also added, as where extensive updates to the arrangement office, selection room, chapel, and front entrance. Plans were also put into place to have an onsite reception area.

Renovoations are currently coming to a close to realize the plans for an onsite reception centre. Once completed we will be able to better serve our families with addition service overflow, and a elegant setting for post funeral receptions. This renovation also adds the facilities to better serve the physically challenged with wheelchair accessiblility to the main level of the building.

The Lynn-Carson Funeral Home's present location was formerly the residence of Mr. J.R. Morrow, one of the area's first funeral directors.

Mr. Morrow actually operated a funeral business from the back of his furniture store at 282 King Street, at a time when furniture and caskets were seen as related products. As most funerals were conducted in the home of the deceased, or from the church, the need for other than preparation space was minimal. Morrow purchased the combined furniture-casket store in 1883 from Mr. C.W. Laing, who had founded the store in 1878.

When Morrow sold the business to Alexander Barrie in 1912, he purchased the present location of the Lynn-Carson Funeral Home as his residence.

Mr.Barrie then branched out and began Midland's first ambulance during the early years of the Great War. In the 1930's, St. Andrew's Hospital took over the operation.

During the difficult years of the "Dirty Thirties" people began living in more urbanized flats and apartments, creating a need for funeral visitation space. At this time Alex Barrie purchased J.R. Morrow's home on First St. and converted it into a funeral home. In 1961, the chapel was added. Mr. Barrie died in 1948, and his sons, Bruce and Ross carried on the business until Ross died in 1953. Then, Bruce and his son Ward continued until 1966, when Bruce died. Ward and his mother Elva subsequently sold the home to Robert Stoddart of Paisley, Ontario three years later. The Barrie family continued to run the furniture store on King Street, which was split off from the funeral business when Stoddart purchased it. Robert Stoddart added the large area to the rear of the building, which orginally served as a garage. Recently this space has been converted to a spacious reception center.

James Lynn bought the business in 1971, and operated it until it was sold to the present owner in 1995, Robert Carson, also the owner of the then named Doolittle-Carson Funeral Home in Orillia. The Lynn name was retained in Midland, as was the Doolittle name in Orillia to stress the family continuity of both businesses. The Carson family operates both funeral homes, splitting their time between both communities and rely heavily upon the Midland staff for much of the day-to-day operation.