There is really only one way to describe the Carson Funeral Home building, magnificent and elegant.

Without question, this impressive building is one of the finest homes of its era in the Province of Ontario. Noted Toronto architect, P.J. Gibson, originally designed this beautiful building and was intimately involved in all aspects of its development. According to the original contract, all materials were to meet Gibson’s specifications right down to the formula of the mortar in the foundations.

All mortar not otherwise specified is to be composed of one part lime to two parts clean sharp sand thoroughly incorporated together and mixed with clean water.

Mortar for face work to be colonial black with Cabot mortar color.

All foundation walls to be built of first class rubble masonry with large field stones well laid and bonded and thoroughly flushed with mortar and pointed at completion.

Properly protect all foundation from frost with an abundance of manure in a manner satisfactory to the architect, the contractor to be responsible for all damage resulting from frost. 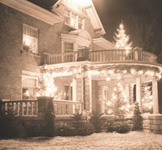 That Gibson knew what he was talking about has become readily apparent. Today, 100 years later, there is not one crack in the foundation, a remarkable feat considering the climate in this region over the past century.

Gibson designed the home for Dr. Ainsley Ardagh, an eyes, ears, nose and throat specialist of Toronto who was setting up practice here in Orillia just after the turn of the century. He built the large six-room home for his wife from Kentucky. The sweeping semi-circular veranda is reminescent of the grand southern mansions of the period. The building was completed in 1906.

A friend telephoned Dr. Walter Woodrow at his office in the Toronto Medical Building to say that Dr. Ardagh was planning on retiring. Dr. Woodrow, specialising in the same field, was originally from Coldwater and jumped at the chance to move back to the area. He rented the home for three years and in 1935 purchased the building and its medical facilities. Dr. Woodrow was a well-known and respected citizen in this community and practised medicine here for 53 years before retiring. Dr. Woodrow was also one of the movers and shakers of the community, if that is the right term. According to local historians, a great many of the political decisions affecting the town were discussed and possibly even decided in Dr. Woodrow’s den at the top of the stairs leading to the second floor. The den was a fascinating room in itself. The walls were covered with magazine covers and headlines from the influential newspapers of the era.

Incidentally, the door midway on the wall of the funeral chapel was the original door leading to Dr. Ardagh and Dr. Woodrow’s office. At one time a veranda stretched across the front of the building, however additions were added on each side, but great effort was made to maintain the graciousness of the main entrance with its impressive columns and cut glass panels we see now as we approach from Coldwater Road. The glass in the entranceway and doors are the original panels and the prism effect when the sun is shining through is quite stunning.

Almost everything in the home has been retained or restored. The doorframes, the cornices around the ceilings, the ceilings themselves and many of the beautiful chandeliers that are seen throughout the building, have all been there from the beginning.

George Crawford of Doolittle Crawford Funeral Home purchased the building from Dr. Woodrow in 1978 and started making the necessary changes for the funeral operation. But George loved the architecture of the home and was careful to maintain the integrity of the original design. Bob and Ann Carson bought the building and the business from George and Lil Crawford in 1982 and continued with the renovation and again they always kept the original design and detail in mind.

The Carsons have made some major additions over the past 24 years, particularly at the rear of the building. The entrance off the parking lots behind the home was added to facilitate the expansion of the funeral home, but the design is so close to that of the Coldwater Road entrance that one wonders if it too was there in 1906. It blends in perfectly with PJ Gibson’s original plan. Even the wheelchair access elevator could have been there from the beginning.

The sophistication and timelessness of this home is difficult to describe. To fully understand how truly beautiful this building is, one has to actually see it. If you are an architectural buff or just someone who appreciates exquisite things, why not drop by and see the home yourself?

The staff at Doolittle-Carson won’t mind. They love the place and would be happy to give you a quick tour.

As we said at the beginning of this article, there is only one way to describe this wonderful building, ‘magnificent and elegant’.

A rather interesting fact, Dr. Ardagh moved here from England. There was no furnace in the original building. Eight fireplaces heated Dr. Ardagh’s entire home, six still remain today. It wasn’t until 1918 that a furnace was installed and with it a large boiler. For a number of years this impressive building contained a doctor’s office which included an operating and recovery room on the third floor.