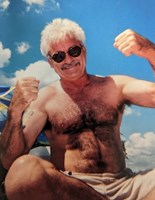 It is with great sadness that we announce the passing of Ronald Robert Pyke. Ron passed away suddenly in his home in Midland on Monday April 25, 2022 at the age 69. He was a loving and generous father to his one and only "pumpkin", Jennifer Pyke (Josh Ladouceur). Cherished "Papa Ron" of Bentley, Lincoln and Joey. Dear brother of Karen Willchuk(Craig Willchuk), Denise Bourdon(Stan Bourdon) and Sydney Duval(Gail Cruise). Predeceased by his mother Anne Duval, brother John Pyke and sister Dianne. Survived by his father Sid Duval and his ex wife and friend Linda Dunn. All of his neices and nephews will truly miss their "Uncle Ronnie". Ron was a simple man, a very kind and generous soul with a rough exterior. He always put his family before himself. Ron was born in Toronto on August 31st, 1952, but grew up in Penetang in their family home on Fox St. He was always a rebel, he and his brother John got into all kinds of trouble as kids. In his early 20's he moved out West to Calgary with his brother John. From there he had many adventures and good times. He travelled to many places, stopping to take pictures along the way. When Ron was 27 years old, he joined the Military and all the guys called him Grandpa because he was the oldest one in his division. He never forgot his family, he wrote letters home all the time with great detail. For a period of time he sailed on the Great Lakes and liked to signed his letters as "Christopher Columbus" or "The Big Sailor". He served in the Military for 5 years. When Ron got married and settled down back in Penetang, he got a job at Baytech Plastics and worked there as a painter for 26 years before retiring at the age of 60. Ron loved the outdoors, fishing, camping and gardening were a few of his favorite things. He grew beautiful gardens in his life and made the world's best homemade pickles. Still to this day, you won't find a pickle that measures up to his! Ron was a very active man, whether he was taking his daughter on their yearly Wonderland trips or playing pool in the back of Captain Ken's, he was always on the go. Two of his greatest accomplishments that he liked to talk about were that he went back to school to get his Grade 12 in 1998 and graduated with honors and that he ran the Terry Fox Run at 50 years old. The last 10 years were tough for Ron as his health declined rapidly and he was no longer able to do the things he loved. He made it his mission to make sure his daughter and his grandchildren had everything they needed and would be well taken care of in the event of his passing. Ron will be remembered for his generosity, his sense of humor and the fact that he always had a smoke and a beer in his hand! Friends will be received at Carson Funeral Homes, 290 First Street, Midland (705) 526- 6551 on Tuesday May 3, 2022 from 11am till time of memorial service in the chapel at 12pm. After which, there will be a reception and light lunch for family and friends. Memorial donations to the charity of choice would be appreciated by the family if desired.