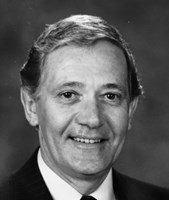 Dr. Tuck grew up in Allandale and attended Ferndale School and Barrie Central Collegiate. After starting high school at age 12, he was the second youngest ever to have graduated from the Canadian Memorial Chiropractic College.

This gentle man practised chiropractic for over 55 years in Barrie and the Orillia area and is fondly remembered and respected by generations of former patients and colleagues. He was a leader in his profession, serving at both the local and provincial levels for education and advocacy. He was also a past president of the Barrie Kinsmen Club.

His passion for music began with WA Fisher and the Barrie Central Collegiate Band, where he played euphonium. In later years, he played with the Barrie Concert Band, the Orillia Wind Ensemble, the Gravenhurst Bifocals and, on occasion, the Muskoka Band. He also helped pay his way through college playing trombone in dance bands at many local venues.

His wife and family would like to acknowledge the care and support of Dr. Ben McNaull, OSMH, North Simcoe and Muskoka LHIN, Bayshore, Paramed, other affiliated agencies, support workers and Carson Funeral Home.

He will be greatly missed by his family, former colleagues and many friends in both Ontario and Naples, Florida.

Cremation has taken place. There will be a celebration of his life in the summer.

Donations in Dr. Tuck’s memory may be made to Comfie Cats Shelter (705-326-1545) https://comfiecatshelter.wixsite.com/comfiecats